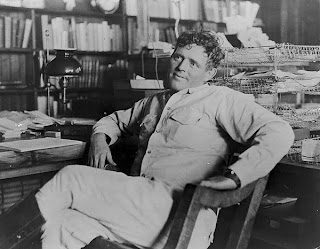 (1876-1916) American writer. Jack London (John Griffith) lived a life that was full of adventure, some of which he dramatized in his most famous works,is known for "Call of the Wild" and "White Fang." His best novel, "The Sea-Wolf," was based on his experiences at sea.

Gerald Haslam writes, "Jack London has been more widely read and translated than any other American author in history." This book offers selections from many of London's best-known works, many of which depict adventure in all of its various forms.

London was able to write with a fresh and vital perspective because he lived many of the adventures he wrote about in his tales. From an early age, he was able to survive by various legal and illegal means. He was an oyster pirate, paperboy, salmon fisherman, fish patrolman, and sailor. He worked in a canning factory, a jute mill, and a laundromat.

Then, in 1897, London took part in the Klondike gold rush. He would later write that he found himself in the Klondike. He said, "There nobody talks. Everyone thinks. You get your true perceptive. I got mine."

Jack London's first book was published in 1900. In the years to follow, London's stories, novels and other works covered a wide spectrum of human experience. He wrote about the dehumanization of a human being in "The Apostate": "There had never been a time when [Johnny] had not been in an intimate relationship with machines. Machinery had almost been bred into him, and at any rate he had been brought up on it." But, London is able to tap into something far deeper than the surface horrors, injustices and dehumanizations in human nature.
He takes us with him on these journeys to discovery, thrilling us with the adventure. His works remain fresh and accessible, because, as Haslam explains, London "helped invent what we think of as modern American prose."