Does the Noise in My Head Bother You 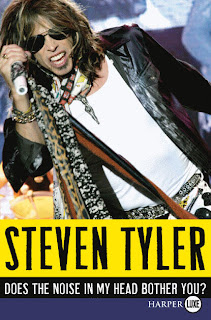 Am just loving Steven Tyler's new book, "Does the Noise in My Head Bother You?" just arrived today, on my day off & already I can't put it down...How PERFECT IS THAT?

"I've lived through the changes of not knowing ANYTHING, to knowing EVERYTHING & now at 63 I'm back to NOT KNOWIN' NOTHIN'. And when your mind is free from so-called knowledge, it is set free to use its imagination ~RoMANtics. SeMantics. Exotic, neurotic, you got It! Does the noise in my head bother you,yet. Yeah? Really? I'd say we're off to a good start"

"I was born in the Polyclinic Hospital in the Bronx, March 26, 1948. As soon as I could travel my parents headed straight out of town to Sunapee, New Hampshire, to the little housekeeping cottages they rented out every summer...I was put in a crib at the side of the house. A fox came by and thought I was a cub, grabbed me by the scruff of my diaper, and dragged me into the woods. I grew up with the animals and the children of the woods. I heard so much in the silence of the pine tree forests that I knew later in life I would have to fill that void. The only thing my parents knew was that I was out there somewhere. They heard me cry in the forest at night, but when they came up to where I was, all they saw was a big hole in the ground, which they thought was the fox's den. They dug and dug and dug, but all they found was the rabbit hole I'd fallen into...like Alice

And like Alice I entered another dimension: the sixth dimension (the fifth dimension had already been taken). Since, then, I can go to that place anytime I want, because I know the secret of the children of the woods; there's so much in silence when you know what you're hearing...what dances between the psycho-acoustics of any two notes and what reads between the lines is akin to the juxtaposition of what you see when you look in the mirror. My whole life has been dancing between these worlds: the GOAN ZONE, the Way-Out-o-Sphere and...the UNFORTUNATE STATE OF REALITY...When I finally got pulled out of the rabbit hole, my parents brought me back to the third dimension. Like all parents they were concerned, but I was afraid to tell them that I have never felt more comfortable than being lost in that forest..."