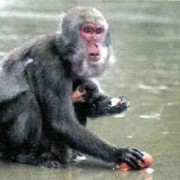 There is much talk in metaphysical and spiritual circles, about the concept of "reaching critical mass" which will produce a major shift in consciousness on our beloved planet, which in kind, will also effect the raising up of our entire Universe...

In speaking to a fairly large group of enlightened individuals a couple of weeks ago, I was surprised that many o

f them had not heard of the idea of reaching critical mass or the concept of Ken Keyes' classic, "The Hundredth Monkey", it was this scientific breakthrough that led up to this awareness...

I am sharing it here, so that those who have not heard of this phenomenon, will be likewise enlightened and encouraged...literally the future in our hands, minds and hearts...

In the book The 100th Monkey Ken Keyes, Jr. tells the story of a scientific research study on monkeys that supports the notion that quantum shifts can occur when a population reaches a “critical mass.” This phenomenon is often referred to when one is in need of evidence to support the belief that an optimistic future is possible for humankind. The 100th Monkey empowers us to have faith that if enough people will just think the right loving and compassionate thoughts —

When we reach the 100th human—or whatever number is the tipping point—then suddenly, almost magically, our world will shift.

The Japanese monkey, Macaca fuscata, had been observed in the wild for a period of over 30 years.

In 1952, on the island of Koshima, scientists were providing monkeys with sweet potatoes dropped in the sand. The monkeys liked the taste of the raw sweet potatoes, but they found the dirt unpleasant.

An 18-month-old female named Imo found she could solve the problem by washing the potatoes in a nearby stream. She taught this trick to her mother. Her playmates also learned this new way and they taught their mothers too.

This cultural innovation was gradually picked up by various monkeys before the eyes of the scientists.

Between 1952 and 1958 all the young monkeys learned to wash the sandy sweet potatoes to make them more palatable.

Only the adults who imitated their children learned this social improvement. Other adults kept eating the dirty sweet potatoes.

Then something startling took place. In the autumn of 1958, a certain number of Koshima monkeys were washing sweet potatoes -- the exact number is not known.

Let us suppose that when the sun rose one morning there were 99 monkeys on Koshima Island who had learned to wash their sweet potatoes.

By that evening almost everyone in the tribe was washing sweet potatoes before eating them.

The added energy of this hundredth monkey somehow created an ideological breakthrough!

Colonies of monkeys on other islands and the mainland troop of monkeys at Takasakiyama began washing their sweet potatoes.

Thus, when a certain critical number achieves an awareness, this new awareness may be communicated from mind to mind.

Although the exact number may vary, this Hundredth Monkey Phenomenon means that when only a limited number of people know of a new way, it may remain the conscious property of these people.

But there is a point at which if only one more person tunes-in to a new awareness, a field is strengthened so that this awareness is picked up by almost everyone!

(from the book "The Hundredth Monkey" by Ken Keyes, jr. The book is not copyrighted and the material may be reproduced in whole or in part. You can look at the whole book also.) 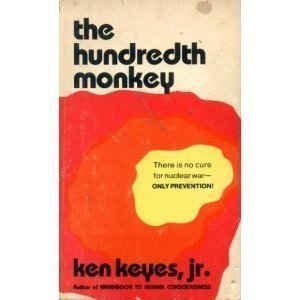