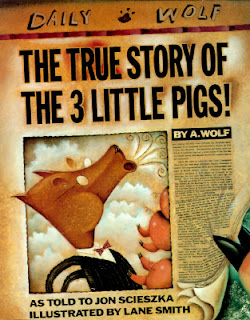 Found this delightful little gem of a book at work in the "Reading Adventureland Exhibit"... it really appealed to my sense of humor, so I just had to share it here...:)

"The True Story of the 3 Little Pigs" (by A.Wolf) as told to Jon Scieszka...
(or probably more aptly titled, "The Big Bad Media Strikes Again"...LOL)


"Everybody knows the story of the Three Little Pigs.
Or at least they think they do.
But I'll let you in on a little secret.
Nobody knows the real story, because nobody has ever heard my side of the story.

I'm the wolf.
Alexander T. Wolf.
You can call me Al.
I don't know how this whole Big Bad Wolf thing at started, but it's all wrong.
Maybe it's because of our diet.
Hey, it's not my fault wolves eat cute little animals like bunnies and sheep and pigs. That's just the way we are.
If cheeseburgers were cute, folks would probably think you were Big and Bad, too.

But like I was saying, the whole Big Bad Wolf thing is all wrong.
The real story is about a sneeze and a cup of sugar.

THIS IS THE REAL STORY...

Way back in Once Upon a Time time, I was making a birthday cake for my dear old granny.
I had a terrible sneezing cold, and I ran out of sugar.

So I walk down the street to ask my neighbor for a cup of sugar.
Now this neighbor was a pig.
And he wasn't too bright, either.
He had built his whole house out of straw.
Can you believe it? I mean who in his right mind would build a house of straw?
So of course, the minute I knocked on the door, it fell right in.
I didn't want to just walk into someone else's house. So I called, "Little Pig. Little Pig, are you in?" No answer.
I was just about to go home without the cup of sugar for my dear old granny's birthday cake.
That's when my nose started to itch.
I felt a sneeze coming on.
Well I huffed. And I snuffed. And I sneezed a great sneeze.
And you know what? That whole darn straw house fell down.
And right in the middle of the pile of straw was that First Little Pig...dead as a doornail.
He had been home the whole time.
It seemed like a shame to leave a perfectly good ham dinner lying there in the straw. So I ate it up.
Think of it as a big cheeseburger laying there.

I was feeling a little better. But i still didn't have my cup of sugar.
So I went to the next neighbor's house.
This neighbor was the First Little Pig's brother.
He was a little smarter, but not much.
He had built his house of sticks.
I rang the bell on the stick house. Nobody answered.
I called, "Mr. Pig, Mr. Pig, are you in?"
He yelled back, "Go away wolf. You can't come in. I'm shaving the hairs on my chinny chin chin."
I had just grabbed the doorknob when I felt another sneeze coming on.
I huffed. And I snuffed. And I tried to cover my mouth, but I sneezed a great sneeze.
And you're not going to believe it, but this guy's house fell down just like his brother's.
When the dust cleared, there was the Second Little Pig...dead as a doornail.
Wolf's honor.

Now you know food will spoil if you just leave it out in the open.
So I did the only thing there was to do.
I had dinner again.
Think of it as a second helping.
I was getting awfully full.
But my cold was feeling a little better.
And I still didn't have that cup of sugar for my dear old granny's birthday cake.

So I went to the next house.
This guy was the First and Second Little Pigs' brother.
He must have been the brains of the family.
He had built his house of bricks.
I knocked on the brick house...No answer.
I called, "Mr. Pig, Mr. Pig, are you in?"
And do you know what that rude little porker answered?
"Get out of here, Wolf. Don't bother me again."
Talk about impolite!
He probably had a whole sack full of sugar.
And he wouldn't give me even one little cup for my dear sweet old granny's birthday cake.
What a pig!
I was just about to go home and maybe make a nice birthday card instead of a cake, when I felt my cold coming on again.
I huffed. And I snuffed. And I sneezed once again.
And then the Third Little Pig yelled, "And your old granny can sit on a pin!"

Now I'm usually a pretty calm fellow.
But when somebody talks about my granny like that, I go a little crazy.
When the cops drove up, of course I was trying to break down this Pig's door.
And the whole time I was huffing and puffing and sneezing and making a real scene.

The news reporters found out about the two pigs I had for dinner.
They figured a sick guy going to borrow a cup of sugar didn't sound very exciting.
So they jazzed up the story with all of that "huff and puff and blow your house down."
And they made me into the "Big Bad Wolf."