"The Kabbalah Code" by James Twyman 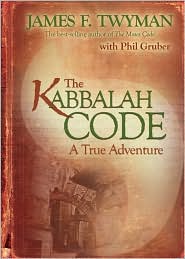 JIMMY TWYMAN HAS DONE IT ONCE AGAIN!!!!

I Just finished reading a book by James Twyman that has resonated with me so profoundly through every part of my being, and has brought so much clarity to the quandries I have been facing, that it has literally taken my breath away...

It spoke to me on such a personal level in so many ways that cannot even be explained or understood, among many validations

of my own experiences lately with the Divine Mother, St. Michael and the Knights Templar, right down to the mind blowing significance to me as a devotion I had to a particular saint when I was a child, St. Catherine Laboure', whose name I took at my confirmation...

This book has put all the myriad pieces of the puzzle together for me, as I am sure it will for many others, Workers in the Light whose purpose and vision is being reawakened...it is the Map we have been praying for...

And now I must exhale, and move joyously forward with purpose and conviction...

The book is called, "The Kabbalah Code: A True Adventure", please everyone, this little book is one of monumental significance...IF YOU ARE SO GUIDED, PLEASE CHECK THIS LITTLE GEM OUT RIGHT AWAY!!! Jimmy is truly one who walks in the Light, has been given the gift of great vision, and has a mighty mission here at this time...please join up and take part in one of the greatest shifts and transformations that our Beloved Planet and all its inhabitants have ever experienced...Together we Can and We Will!

The Kabbalah Code
A True Adventure
by JAMES F. TWYMAN, PHIL GRUBER
During the world premiere of The Moses Code movie, an angry audience member challenges James Twyman in a very unusual way. She says that his ideas surrounding the story of Moses and the name given to him by God, “I AM THAT, I AM,” are incomplete. It wasn’t a comma that unlocked the secrets of creation, but a Yud, the most sacred letter in the Hebrew alphabet (which looks very much like a comma).
Thus begins Twyman's quest to discover the true meaning of the Sacred Names of God, leading him to an adventure in Paris that changes his life forever.

Within its pages, James enters the world of the ancient Kabbalah, the mystical teachings of Judaism, and realizes that the rabbit hole goes far deeper than he thought. Join James and Phil Gruber—a friend and spiritual teacher who decides to initiate this incredible journey—as they travel to ten of the most sacred sites in Paris, unlocking the secrets found in the many Names of God and revealing lost teachings that may change the world. Written in the style of a high adventure such as The Da Vinci Code and The Celestine Prophecy, this is an unforgettable book that will draw you into a world of intrigue and Kabbalistic lore.

"The greatest lessons we learn usually come from the adventures that shape and change our lives. This adventure, the one I describe in this book, came upon me as a great surprise. I didn't set out to do any of the things that you're about to read, nor did I initially think that they would result in a book that others might find valuable. But the more I sat with it and reflected on the details of those two amazing days in April 2008, the I realized that this adventure wasn't meant for Phil and me alone. It was nice having a partner in the journey...someone to not only share the remarkable details with, but to also verify them latter. A witness is a good thing to have when recounting something so extraordinary.

As stated on the front cover this is a true story, but for some may be hard to believe. I'm lucky to have traveled around the world as a Peace Troubadour and to have had many such adventures, but there still may be those who read these words and think, "Come on, did this really happen?" This answer is yes...A number of the experiences you are about to read will seem amazing and perhaps even unbelievable, but the truth behind them all is the same: we currently have the opportunity to use this universal wisdom to change the world and inspire a lasting peace. The only question remains is, Will we accept the challenge?"
(From the introduction of "The Kabbalah Code: A True Adventure" by James Twyman)
Posted by Linda Living Joy Lorenzo at 6:29 AM